The Jetta, launched in India in mid-2011,and am buying a car in 2013and this car is so good.As is the norm, this is a mid-life facelift for the sixth-generation sedan. The changes aren’t big, but enough to keep the existing interest in the model intact. These include a ‘chromier’ and larger central grille, which manages to bring a bit of freshness, coupled with the new-look front bumper that now houses squarish foglamps, giving the Jetta a purposeful look - same as the erstwhile Passat. There is relatively more action at the rear with new, sharper taillights, a redesigned boot-lid with a noticeable spoiler lip and angular rear bumper. There are updates on the interiors as well. The Jetta now gets a flat-bottomed steering wheel, piano-black finished centre console and white on black instrument display read outs. The overall layout remains the same and looks quite conventional. Nothing gimmicky going on here. The seats are large and well cushioned and there is enough room for five passengers. On the move, the Jetta remains one of the most well-behaved and comfortable executive sedans out there. Ride is firm but supple. The steering feels nice to hold and is communicative enough for you to feel confident to go faster, when needed. Body roll is controlled and the car feels solidly planted on the road. There is a calm undertone to the overall drive feel. The numbers2.0 TDI: 1968cc, 6M/6A, 138bhp, 320Nm, 19.3kpl*2.0 TSI: 1390cc, 6M, 120bhp/200Nm, 14.69kpl*Ground clearance: 159mmPrice: ₹13.87-19.77 lakh (ex-showroom, Mumbai) The verdictSubtle changes to a sorted design, but it remains the same solid, German saloon that feels more than capable for a drive to that golf course meeting – in the city or outside it. i love my jetta the car is cool,, lol

4.5/5
Based on24 User reviews
Write a Review and Win
An iPhone 7 every month! 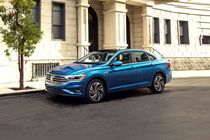