Volkswagen Beetle is the best luxurious car in India

The most awaited Volkswagen Beetle is the best luxurious car in India. I have listened that the new Beetle launch on tomorrow in Indian Market. It will come up customers expectation, because mostly person eagerly waiting for new small magnificent car. I have decided to purchase it, but I have really confused about the features and other thing which has made a luxurious car. I hope it will make also a craze of small cars after the big achievement of Tata Nano. I think no issues about safety features, because it has made already according to body language. I am really affected to Volkswagen Beetle. It a little by the feature and other thing is really a bigger to make a luxurious car.

ok, ok, ok, but what about the price tag due to high import duty i req. to vw to built this lovely car in india

3.2/5
Based on11 User reviews
Write a Review and Win
An iPhone 7 every month! 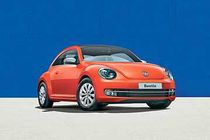