Volkswagen's belated entry into the compact-sedan segment through its Ameo model range (now available with a Diesel engine variant) is a very good one and for the Company, an “only for India” first. The Ameo here reviewed wears a great looking if not sounding “Blue Silk” colour and powers its way forward through a 1.2 litre petrol engine driving the front two wheels.The Ameo from the front and front-three quarters looks almost identical to the Polo hatch, however the Ameo design is more than just a simple boot-job. The rear-end design and boot addition in the Ameo work well and look good in my view, though I must confess that I have a preference for strong lines and Germanic design in general. Further, to accommodate the sedan boot addition and overall aesthetics and balance whilst still managing a sub-4 meter length (3995 mm), a bit has been shaved up-front and the C-pillar adjusted with a slightly lower roof line. The minimal use of chrome and shiny bits help maintain the clean and elegant German-look, augmented by the smart looking 15' alloys (only in top “Highline” trim).The 1.2 litre petrol engine with 75 PS of power and 110 Nm of peak torque @ 3750 rpm will not bring a smile to your face, however for city dwellers and highway cruising there is still enough to get the job done. Keep the pot boiling over 1500 rpm and most city manoeuvres can be executed without much drama. What does irk and is possibly the Ameo's only weakness, is the engine noise that is quite audible at almost any speed or gear, especially when launching or revving. Given the fact that it is petrol and up against some smooth Japanese and Korean units, the Ameo engine sounds a bit crude and unrefined, though not in operation. The Ameo reviewed here is the top specified “Highline” variant. The cabin interior is airy, plush and not too fussy. Three adults abreast at the back would be a squeeze, whilst knee and leg rooms for the average Indian height will be manageable. The presence of rear air-conditioner vents would also assist travel in summer months. The seats are well cushioned and driver seat also gets high adjust-ability. The boot space of 330-odd litres is not class leading but the opening is well shaped to provide easy access and loading-unloading goods. What lets the Ameo down is the engine, if not in outright power but the sheer noise it generates, which must be addressed in quick time to appease fastidious customers who are otherwise use to Japanese and Korean silence. With the Ameo diesel now on sale, the petrol may also lose sales to its own diesel variant where such sound may be considered a manageable trade-off for the higher power, torque and fuel economy. Otherwise the Ameo petrol is a great little car that offers an inexpensive entry into the much sought German car ownership and experience.

4.5/5
Based on209 User reviews
Write Your Review
Ameo Reviews 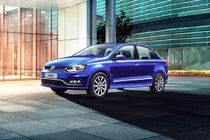