After deciding to buy a family car, we sought opinion from existing users and tried the Swift Dzire. But the leg room was too little for a person of my height ( I am 6 foot 1 inch). Hence we decided to go for the Etios. The test drive on a diesel VXD model was good. However we had decided to go only for a petrol version as our use was very limited and our long drives few and far between. We had a couple of long drives (to Kodaikanal and Coimbatore) besides a few hundred kilometres to nearby towns. The car is good to drive except for the clutch which is a little heavy. Hence driving within city proves a little difficult though not very. Mileage as ascertained from the trip meter is around 9 km in city conditions and 13.5 in highway. The Toyota engineers say that once the car settles down a little after say 8 months, the performance would improve. We are banking on that promise. The drive of 440 km had us consume only around 25 litres which makes it 17.6 or around 18 km which is not bad. But we could not be certain because we had some petrol in the car and we are unable to gauge at what quantity the fuel indicator starts flashing. The gauge doesn't give an assessment of the number of kilometers to empty to decide on when to fill the gas again. Driving at low speeds say in 2nd gear makes you feel very sluggish. But the boot space is enormous. Overall we are satisfied yet look for some betterment in the accessories such as rear vent ACs and rain sensing wipers. Overall I would rate this car as good with room for improvement at several fronts.

Nice review. However the photo of your vehicle would have been better 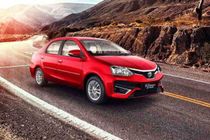