Platimun Etios: the Bull among tigers

Platimun Etios: the Bull among tigers

The Brief: Sept. 19th was a day for reckoning for Toyota as it mustered bravery and launched the much anticipated face-lift version of Etios. And wolla, they even gave it a grandeur name like: Platinum.Now whats the catch? Well, I believe Etios has made a radical comeback with this pumped up aesthetic revamp with airbags n ABS as standard. & that's it really! For many among us this may sound both exhilarating as well as disappointing but for Toyota who is terribly ailing behind under the likes of Honda City, Maruti Ciaz & Hyundai Verna, it might be a bolt out of the blue.Exterior: For starters, the front bumper finally looks like a damn front bumper. That's just one of the things that instantly makes you crave for the beast. In addition, it is evenly distributed, lots of black background with ample cushion for fog lights, chrome grill/garnish & other bumper accessories.For rear & sideways, Toyota hasn't been given us anything worth noticing but it does facilitate the over-all contour by providing electronically adjusted-able OVRMs & a new rear boot garnish design.Under The Hood: It comes with the same 1496cc petrol engine, producing the same 88bhp & displacing the same torque of 132Nm which was available in the earlier model. Thus making it quite evident Toyota hasn't tempered much with their well-refined silent engine. However, it (the engine) only starts to become responsive after kicking in 1000 revolutions n above. So transition from 1st to 2nd gear feels dull but as you cruise to the heavier speeds, one does experience the increased velocity change.Since i recently purchased this car, I happen to evaluate the mileage within the city. Chandigarh being almost similar to all metro cities, has lot many traffic infringements, rule violation & rash drivers. As such, Etios continues to deliver the acclaimed mileage of 13-13.5 Kmpl. I do expect after its 1st service, this figure might go up by 0.5 points. Improving driving skills & fuel saving techniques will also add to the advantage.Interior: Remember Nissan Sunny! How they used boast their extraaa leg space both in the front and rear seats of the car. Well, Etios is no less than a competition.Among many, one of the reasons to particularly love this car is the mega cabin space. I am 6'4 (which is like really tall) but still the ease with which i am able to get so much driving space for myself is simply amazing. Also, if one does push the driver seat all the way back, the pillion will have ample space to stretch his legs for a long tiring road trip as well.What about the dashboard? Well lets be honest about it. Its old and grumpy. The AC vents are vertical, the speedometer & tachometer are located at center, the glove box looks hideous. Conclusively the biggest setback for Etios is its dashboard. I mean why would you place the driver's gear at the center? All the gauges has to be located at their conventional position. They are a special piece of instrument dedicated to the driver use only.If you were about to buy the old model you would have hated this design. But in the midst of harsh criticism, the face lifted version has saved its ass by providing digital gauges which eventually looks more sporty, more rich in texture. Hence, its more soothing to the eyes than before. Overall the build quality feels premium & if one goes with upgrading the dash & doors with wooden style trim, you can comfort yourself with fit to pocket luxury look.Lastly the boot. Its freaking massive! Unlike its competitors, Etios has clearly taken a lead in this feature. With 595 liters, it stands at top beating all the rest. Like they say, the bigger the better.Maintenance: It has been only a month since I bought this car & it will be too early to judge the maintenance overheads. In comparison to its diesel counterpart, it has submissively low service charges with:1. Gear oil doesn't need to be changed for lifetime2. Fuel filter changes after every 10000 Km cycle.3. Engine oil changes after every 5000 Km cycle.Final Verdict: This is similar answering to why I bought this vehicle?1. Hatchbacks: I have been driving Alto for the past 6-8 years. So clearly when it was time to switch the car, it was a blunt decision to go for next segment i.e. Sedan. Yes, Baleno was highly lucrative at that time but when you see the car on road, a hatch back is hatch-back & a sedan is sedan.2. Compact Sedans: I was almost closing in the deal with Honda Amaze as it looked more promising against Dzire, Aspire & Zest. But there was always a hesitation with how all compact sedans looked more compact than sedan.3. Sedans: Coming from a middle class family, I contemplated my future investments plans, loan feasibility & budget constraints. Eventually comparing on-road prices, car availability & above said factors, my family concluded to go ahead with Etios.Lastly I would only like to say, its not about finding the right car but eliminating the wrong ones. Etios stands at par as it gives you a premium sedan experience, lots of cabin space, descent mileage & most importantly fits adequately in your budget.Happy Driving! 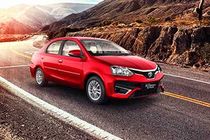