The Tata Tigor has stolen my heart, I'm glued to it! Tata is doing fantabulous these days, they are coming out with beautiful looking vehicles, isn't it? The Tiago looks absolutely amazing in its segment and all those hexagonal details that Tata had put in, makes it stand out among its peers. The Tigor, which is the compact sedan version of the Tiago, has taken the design of the hatch to a different level altogether. I love how well Tata has integrated a boot with the Tiago's silhouette! Though its roofline is very Audi A7 like, it is likeable in a pool of compact sedans with their oddly designed boots.
The winning trick nowadays in the auto space is how well you pack your offering in a given price band to make its value-for-money quotient unparalleled. And Tata with the Tiago perhaps has mastered this recipe, like Renault did with the Kwid, and Maruti did with the Baleno. The Tigor is an outcome of this same proven formula. In fact, Tata has upped its game with the Tigor. It has added more goodies to the already lengthy and segment-defying feature list of Tiago, while retaining the hatchbacks' economical and peppy powertrains. I'm looking forward to owning this. Styleback as Tata likes to call it! 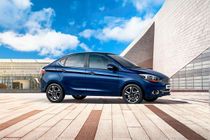