Tata safari car one of the oldest luxurious car which have very efficient for long drive.The SUV was first released in 1998 with a 2.0 litre turbo I4 Diesel engine. It was later upgraded in 2003 as a part of next improved Versions first EX and then EX2 along with Limited edition roll-out with improved interiors and Mechanics which included Power steering, fuel pump, electricals. By far the TCIC EX2 2003-2006 models were the most reliable and refined TCIC Safari. The Safari was extensively modified in August 2005, which included the addition of a new 3-litre DiCOR engine along with modified interiors and exteriors. This 3-litre engine is the first diesel engine from Tata Motors with common rail technology. A 2-litre petrol engineMPFi was also added to the range that same year. It was this modified version that won the Motor Forum's Car of the Year for 2007, in the SUV category. Voted by the users in India. In October 2007 Tata unveiled the 2.2-litre Safari DiCOR which had an increased power output of 143 PS (105 KW). Main problem of sarfari is suspension, body sound and shortage of parts in dealers specially for 3L dicor engine.suspension should be as like as Toyota INNOVA.

3.8/5
Based on54 User reviews
Write a Review and Win
An iPhone 7 every month! 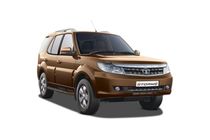