Great Car that ticks all the boxes in its segment

Great Car that ticks all the boxes in its segment

This car is a perfect solution for people like me who have a luxury car but want an easy to use,powerful and reliable car for the everyday commute to the office.
Although it has its own problems and feels a tad bit outdated,it is still a good car.
But where it scores is on air-conditioning,performance and size.
It looks rugged and has no hatchback like looks (eg.Hyundai Creta) or MPV looks (Honda BRV), instead looks like a compact and affordable version of the soon to release X-trail.
It lacks modern comforts such as a touchscreen and climate control,which are must when the car's on road price is near 15-16 lakhs.
And the two best selling items that many of us need: Automatic Variants and All-Wheel Drive.
But still is more rugged,bigger and more nicely built
So if you want a luxurious big hatchback like car go for the creta,which is even more powerful,has more feature and even has an automatic variant
But if you want a powerful,rugged,bigger and a proper go anywhere tough old-school mini suv,The terrano nails it.
But if Practicality suits you best,then the BRV is better.
And in the end if quite affordable and powerful suv is your choice the look at the Duster or S-cross
But the most affordable one is in the end is the vitara brezza and ecosport, with normal performance and more then enough technology
Even then a car that gets you all of these and still looks handsome and has some grunt,it's the Terrano with practicality,performance,economy and ruggedness.
So a good choice after all. Go get one soon!!! 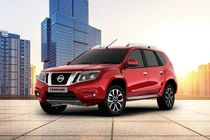