The only company who dared to challenge the dominance of India's largest car manufacturer has to be Hyundai. They made an entry with the Santro and till date, it's sold in decent numbers to be still in production. The trend of premium hatchbacks which started with the Swift also saw Hyundai's participation with the i20. It was a hatch that offered more space more features and better performance.   Now that i20 has carved its own space, Hyundai has launched its next generation version to make sure it competes with all in the best way possible. Ravishing looks, tweaked interiors and improved riding dynamics, the Elite i20 seems fully ready to take all head on. Our first impression report is here. The highlights of the design are large flowing headlamps, profile lines on the hood, diamond cut 16'' alloys, blackened C-Pillar design and edgy rear tail lamps. The Fluidic 2.0 Design might not click for some at the very first look but then it is one of those designs which grows on you with time. With its modern and futuristic design, the Elite i20 leaves a positive impact.   In terms of features, Hyundai has loaded the i20 sufficiently. It features a segment first Smart Pedal where the sensors override braking once it senses abrupt pressing of the accelerator and brake pedals. Excluding base variants Era and Magna, other variants get ABS and airbags. With increasing focus on safety, it would have been nice for them to feature airbags on the lower variant as well.   Factors that make the Elite i20 work?  Compared to its primary competition, the Swift, the Elite i20 feels far more a superior product in terms of overall design and packaging. Looking beyond the Maruti Suzuki tag, the Swift does not stand at par with the Elite i20. Its other rival, the Volkswagen Polo is an impressive product but then it loses in terms of daily running, maintenance costs and efficiency where Hyundai scores heavily. Thus, the Elite i20 will attract consumers from both ends of the bracket. 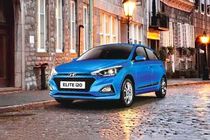