I bought a Hyundai Creta this month after having had my eyes set on this car ever since its launch back in 2015. I already knew about since it is known as iX25 in most parts of the world but never got a chance to get my hands on it before having actually bought it. I didn't even take a test drive, for it was that impressive in its overall impression. I purchased the manual top model in the petrol variant and couldn't have been more content. It's a SUV that feels even bigger from inside and the mere pleasure of driving this car is in itself the most satisfying feeling of the lot. Plenty of boot space and leg-room for the people sitting in the rear seats, plush interiors, great multimedia system and killer looks to cap it all off. Although the fuel efficiency of the 1.6 litre petrol engine isn't as great as one would expect (it is claimed to be 15.29 kmpl) but in terms of standing up against the likes of its competitors such as the Renault Duster, Maruti Suzuki Vitara Brezza, Ford Ecosport and Nissan Terrano, Hyundai Creta takes the cake hands down.For anyone considering buying a compact SUV, go for Hyundai Creta ! 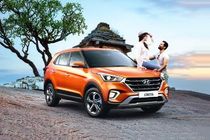