That's a one good jazzy competitor ...

When Honda first introduced the Jazz in India, I was really worried since the prices were high considering what Jazz offered back then. Also, Indian buyers would prefer a sedan over a hatchback at such prices. But with time, the Jazz has evolved enough to rival against the Elite i20, the Swift, the Punto and some other cars in this segment. Exteriors: Although the new Jazz isn't as devilish as the old one, the new cuts on doors n shoulder line makes the look more fluidic. Dark Grey strip with honda emblem added appeal to the front grill. Tapering headlamps look better than ever. Somehow wheels appear smaller while considering the overall appearance. Overall 4.5 stars out of 5 for its looks. Interiors: Dashboard of the new Jazz doesn't impress much. All common features that are needed in a dashboard are there. Steering mounted controls are also available. Everything is there what you need inside a cabin. Also, the feel of the dashboard material feels a bit of a low quality as compared to Maruti-Suzuki. Space: 5 people can comfortably travel. The back seat has been improved with plenty of legroom and even a person with 6ft of height can feel comfortable. It also offers massive boot space without folding the backseat. Practically 3 big suitcases could be easily fitted in the boot. Drive quality: Here where you get mixed feelings about the performance. The Jazz neither offers you a feel of a sporty ride nor a feel of a luxury car. It is somewhere in between. The engine is smooth like all other Honda engines. But at low RPMs it lacks a breath. At higher RPMs the ride is pretty smooth. People who like pickup like that of the Swift, won't appreciate the Jazz. But it offers better handling at turns and twists than both the Swift and the i20. Around 100kmph, the body feels little shaky. Also at high speeds, braking isn't as confident as it feels in the i20. But again that is not an issue since the car comes to a halt as judged. Another problem with the Jazz rather most of Honda cars is the lack of enough road presence and visibility. At corners one won't get enough visibility because of peculiar design of the body near ORVMs. Final verdict: The Honda Jazz has nothing more to offer than any other competitors in its segment. But definitely, its looks are different than a conventional premium hatchbacks. It has got good performance, accessory features, good looks along with the reasonably high price. Still if one wants a different hatch, one should go for it and trust this as it carries Honda's name. If concerned about the price, then well.... you have got better options! 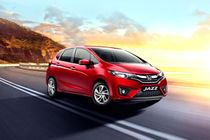