Arrival of the beast

Indian car lovers were waiting for this machine since long , and the day has come when someone like me who loves muscle and luxury together can lay hands directly on this technological V8 supersport , The FORD MUSTANG . The features of this car are too good , especially the electronic line lock which is the best thing for a burnout . The 5.0 litre V8 engine produces an exceptional power of 435 BHP with a 515 Nm of torque . The Mustang feels larger on the road and as a result less wieldy than it does in the States. But don't go thinking it's a talentless heffalump. The new rear suspension has transformed the car's stability and ride control, and although we'd stop short of saying the Mustang has the long range ease of a Bentley, it sucks up distance effortlessly, plus steers pleasingly accurately and is easily rapid enough. It may be big on the outside, but the Mustang isn't a exactly packaging masterclass within. The boot's suitably commodious, but fitting normal-sized adult humans into the back seat isn't an easy undertaking. Especially not if you tick the box for the optional Recaro seats. You really should, though: they are absolutely magnificent bucket chairs. Build quality isn't going to rival the TT and nor is design (it contrasts starkly with the Audi's 'virtual cockpit' sophistication), but that's not the Mustang's schtick it's all about delivering a laidback feelgood factor, and it does that pretty darn well. The Mustang is a very different kind of sportscar. For starters it is loud. Okay, not as loud as a deafening AMG or SVR but it sounds properly angry. Ford has not only stuck to being inspired by classic Mustangs of old when it comes to design but also maintains a bit of raw force like classic cult cars. Compared to say, a Porsche Cayman or an Audi TT, the Mustang feels less clinical, yet it maintains a certain level of modernity in the way power gets delivered linearly and the way the six-speed automatic gearbox slick shifts the car. It isn't buzzy but exudes a certain kind of brawny feel to the whole driving experience think Vin Diesel? It can get the job done although it may not look very lean or feel light-footed. What about the cabin? Is it as good as the Germans ? Of course, not. Interiors also very American here. While the German's stress a bit more on luxury, Ford has just stuck to making sure it all feels sturdy and well built even if it may not exude opulence. But we like that bit. Are you guys machoists ? The car has to be comfortable at the end of the day Which the Mustang is. Most everyday car comforts are built in climate control, navigation, reversing camera, touchscreen multimedia screen. It even has ventilated seats at the front. Plus, there is a whole lot of gadgetry to play with. An all-new independent rear suspension is a major reason for the improved road dynamics. SPECS: Engine: 5.0- litre V8 Power: 435 BHP Torque: 515 Nm Gearbox: 6A 0-100 kph: 4.8 s Top speed: 248 kph Fuel efficiency: 7.4 kpl Airbags: 8 Tyres: 255/40 R 19 front, 275/40 R 19 rear Price: Rs 65 lakh ( ex-Delhi )

4.7/5
Based on52 User reviews
Write a Review and Win
An iPhone 7 every month! 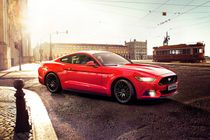