I own a Titanium TDCI for the past 9 month and driven around 13K Km so far.
Brilliantly designed front side and not so stubby back side as a boot attached to a hatch back like the most other cars in its segment
Paint quality is topnotch even after a few hit and scratch it doesn't look like wasted.
Interior (Features, Space & Comfort)
Plenty of leg room in the rear seats, 2 can comfortably sit and 3 is not much of a squeeze, Good amount of boot space and if you organize the luggage properly then you can make use the entire 360ltr boot space comfortably
Front Driver and Co-Drive seats are well positioned in such way that it won't spoil the comfort of both the front rear occupants
Good amount of under thigh support in all the seats, I mostly drive the car and for me it's the best place to be in the car, of course the rear seats are the most conformable one. You will be comfortable on those long journeys but a little extra lumbar support could have been better.
Infotainment - Titanium variant also deserves a bigger display instead of a 2 line display, the sound quality is one of the best, Also the call attend and disconnect button should have been provided as a steering controls in the Titanium variant instead it has only the audio system controls
Engine Performance, Fuel Economy and Gearbox
One of the best engine with 110 hp great acceleration, easy to overtake even in the 5th gear, Great for city driving as I don't fell the turbo lag much, Excellent on Highways
My usage is mostly 30% city and 70% highways while driving at 80Kmph on highways it gives almost 24-25, while driving at 90-100 on highways I get around 22 and beyond 100 it will reduce to 18. So on an average on highways I get around 22 always. While driving on the city usually its 19-21 kmpl (I have calculated using the full tank method and the MID reading is also close), so overall for the 13K Km usage I got around 22 (Just calculated total amount of diesel I have spent by tracking the fuel expense)
Gears are smooth but I find difficulty while shifting between 1st and 2nd also reverse (Revers sometime not engaging properly), A bit of a heavy clutch so it will be little painful while riding in a B2B traffic.
Ride Quality & Handling
So far, the best ride quality I have experienced in the cars that I have driven, steering feels heavy on higher speeds and lighter in slow speeds boost your driving confidence. Less body roll. Good visibility and very less blind spots near the A pillar.
Excellent suspensions, it takes out all the pot holes comfortably, Road noise is less. Less engine noise comes into the cabin when compared to other diesel cars.
I have to talk about the Brakes that I had engaged the ABS a few times and it works perfect. I felt the short braking distance which is good.
Final Words
I feel great about the purchase decision I have made. Aspire gives me everything that I had expected in a car. A Value for Money Package.
Nowadays Fords service cost (Part price and labor) is becoming cheaper like the others, I can do the service for just 3000rs using the Happy Pocket Service even if you want the regular service then it would cost you just 3900-4200 which is comparatively less or equal to other cars in this segment.
Areas of improvement
The sheet metal could have been little thicker.
The exterior design looks good even today but the interior especially the infotainment part is too much out of date, it should be updated with a touch screen and big screens instead of small screen.
The head light throw is sufficient while driving at night, it should be improved with higher power lights.

the defects should be immediately corrected by ford india at chennai plant making the car 100 percent value for money ,and therby benefiting customer and ford ,they should also offer a 5 yr 100000 km warranty as part of sales package rgds

4.6/5
Based on671 User reviews
Write Your Review
Aspire Reviews 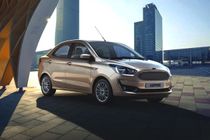